St. Petersburg is situated a little bit upstream from the point where the River Neva reaches the Baltic Sea in the Gulf of Finland, and St. Petersburg and its suburbs get over 95% of their water from this river. 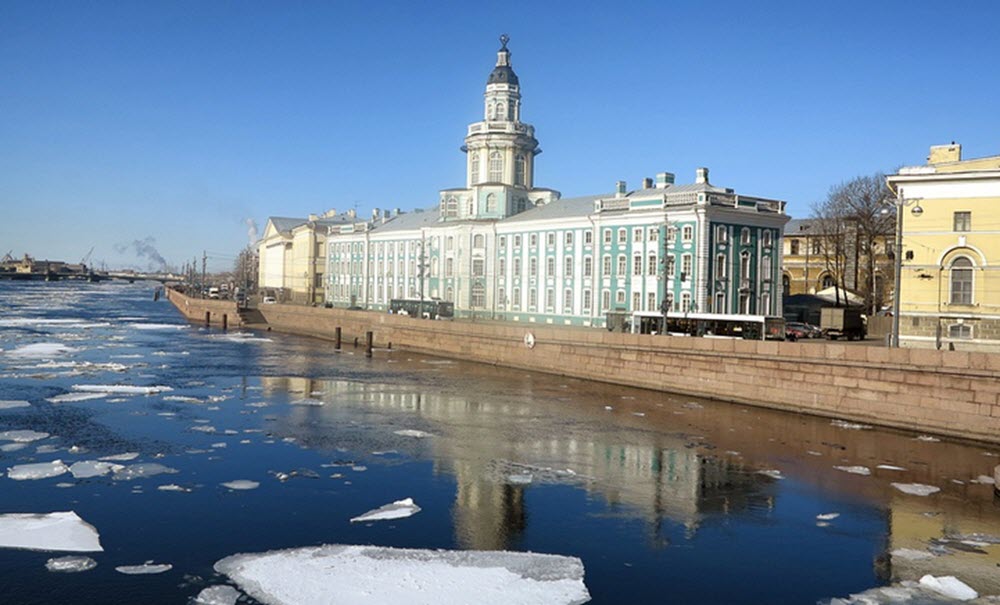 The River Neva is suitable for navigation, with low and steep banks and few shoals, but its transport capacity is limited by its width, depth and bridges. It is a part of the major Volga-Baltic Water and White Sea – Baltic Canal and utilized by vessels with a capacity below 5,000 tonnes.

During the winter, there river turns into ice. The navigation season typically runs from late April to November.

Examples of goods commonly transported on the Neva are timber from the Arkhangelsk Oblast and Vologda Oblast, cast iron and steel from Cherepovets, oil from the Volga region, coal from Donetsk and Kuznetsk, granite and certain other rocks from the Kola Peninsula, pyrite from Ural, and potassium chloride from Solikamsk.

Are there passenger vessels on the River Neva?

Yes, there are plenty of passenger routes from places such as Moscow, Astrakhan, Rostov, Perm, Nizhny Novgorod, Valaam.

Where does the River Neva start?

The Neva is a river entirely within north-western Russia. It flows out of Lake Ladoga near Shlisselburg and runs through the western part of the Leningrad Oblast to reach the Neva Bay in the Gulf of Finland. It is navigable all the way from the lake to the Baltic Sea.

The Neva is the only river flowing from Lake Ladoga. It is also a fairly young river; it is believed to have begun flowing some time between 2000 BC and 1250 BC.

How long is the River Neva?

It is 74 kilometres long.

Despite being fairly short, it is the fourth-largest river in Europe in terms of average discharge – only Volga, Danube and Rhine are larger.

Settlements on the Neva

The largest settlement on the Neva is St. Petersburg. This river also flows through the smaller towns Shlisselburg, Kirovsk and Otradnoye, and dozens of even smaller settlements.

Why is it called Neva?

Several origins have been proposed by researchers, but the situation remains unclear.

The earliest known people to have lived along the Neva in recorded history where Finnic people, and the word neva and its cognates are still common in the Finnic languages, albeit with slightly different meanings. In Finnish, neva means poor fen; an intermediate between (rich) fen and bog. In Karelian, neva means watercourse (natural or artificial channel) and in Estonian we find the cognate nõva which means waterway.

Ever since the city was founded, work on developing St. Petersburg has involved changing the hydrological network of the Niva in various ways. When the city was founded in the early 1700s, the delta are was low and swampy, so canals and ponds were dug to provide increased drainage, and the dug up soil was used to raise the land before building on it.

By the end of the 1800s, the Neva delta consisted of 48 rivers and canals and over one hundred islands. Since then, some of the canals have been filled again. By 1972, only 42 islands remained, all within the city limits.

Since the foundation of the city St. Petersburg in the early 1700s, it has been flooded over 300 times. Floods in St. Petersburg are typically caused by the river overflowing and surge coming in from the eastern part of Neva Bay. Tidal waves are a threat, and so is suddenly melting snow.

An exceptionally heavy flood was recorded in the area in 1691, but this was before the city of St. Petersburg existed.

Flora and fauna around the river

A few centuries ago, the Neva lowlands were still mostly covered in pine and spruce mossy forests. Since then, a lot of the forests have vanished because the trees have been cut down or destroyed by fire. During World War II, the remaining forests disappeared from the St. Petersburg region, while the forests in the upper reaches of the River Neva were reduced by roughly 50%. After the war, some of the land was replanted with a variety of new trees. Today, the upper reaches are dominated by birch and pine-birch grass-shrub forests. The middle region is characterized by swampy pine forest, while the lower stretch is a part of the St. Peterburg urban landscape and includes a lot of parks and gardens, such as the Summer Garden, Alexander Garden, and Field of Mars.